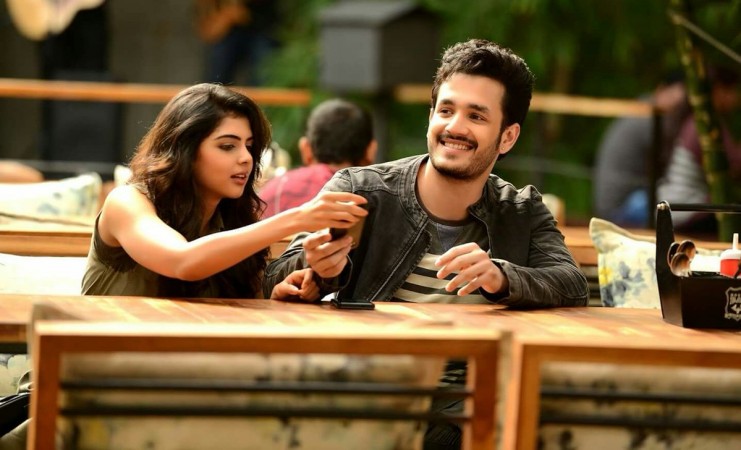 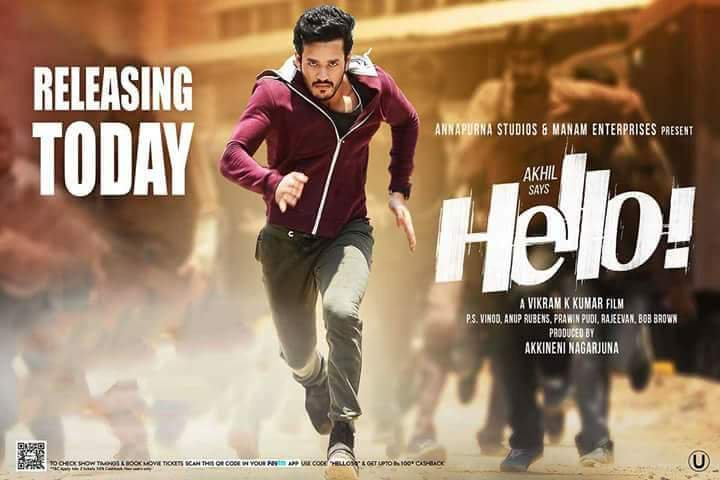 Akhil Akkineni who is well known as Nata Samrat Akkineni Nageswara Rao’ Grand Son and Akkineni Nagarjuna and Amala’s dearest Son. Akhil Introduced to Tollywood at his Childhood Movie named ‘Sisindri’. He mesmourized with cute liitel buddy performance in that movie. After that he never had a screen space or presence in Tollywood. After many years he was relaunched in to Tollywood and appeared in a Cameo role in the climax for the Akkineni’s Family Entertainer ‘Manam’ Movie. Akhil dubet movie as a hero is ‘Akhil’ which is disappointed at Box Office other wise his performance got good Marks in that movie. After 2 Years gap Akhil is coimg to infront of Tollywood by saying ‘Hello’ to Audience and movie Lovers. Yes Akhil’s latest Movie name is ‘Hello’. The Movie Directing by Tollywood tallented young director Vikram Kumar. After Ishq, Manam, 24 movies he is doing his fourth movie with Akhil. Kalyani Priyadarshan who is the daughter of Indian Ace director Priyadarshan. Hello is her debut movie in the Film Industry. Veteran Hero Jagapati Babu, Ramya Krishna, Ajay palying other lead roles in this movie. Music director Anup Reubens composing music for the flick. Cinematographyby P. S. Vinod, Editing by Prawin Pudi and Akkineni Nagarjuna producing the movie under the Banner of Annapurna Studios, Manam Enterprises. 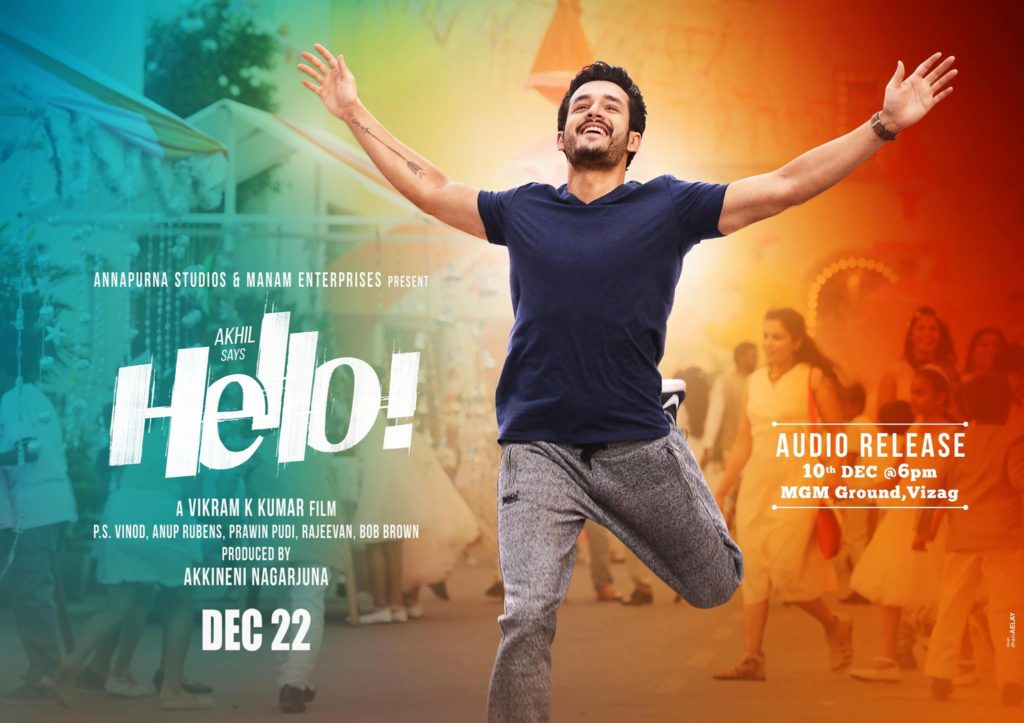 Hello Movie Story revolves around a two youngsters named Avinash and Priya, who are childhood friends and finding for each other at their younger times, The Story Plot is why they seperated in their Childhood and they didn’t forget each other since there and looking forward to find each other. What kind of Circumstances taking place between these Cute Couple…how they passed the obstacles…did they found their Soulmates….whom with they fallin love…..how the love track and Journey goes are the rest of the Story. 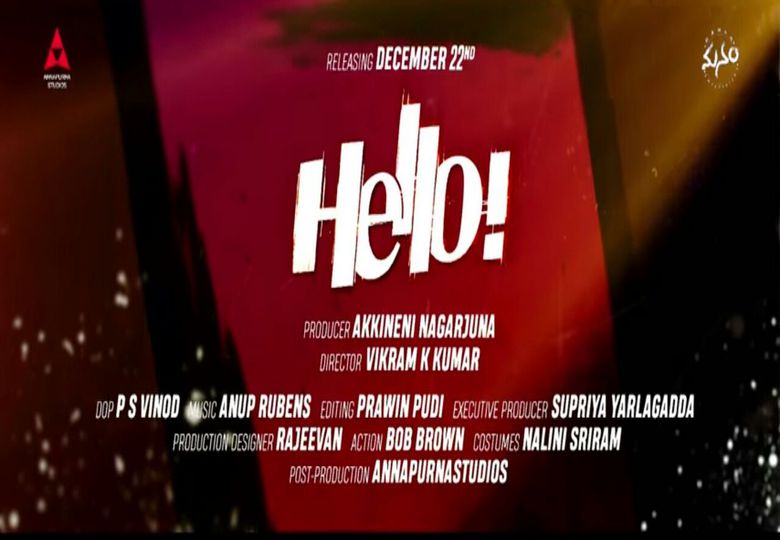 Akhil Akkineni played as Avinash/Seenu Young Boy role who is in hunt for his Soulmate and Childhood friend. Akhil performance is Amazing as Avinash. His emotions carrying in the Sentiment Scenes, Dance and Action sequences are adorable and well matured. Kalyani Priyadarshan and Priya looks cute and gorgeous. Though it is her debut movie her performance and Acting Style is Appreciable.She looks like an Angel with her Cute Smile and facial expressions. Damn sure she will heart-throb person for the Audience. Jagapathi Babu and Ramya Krishna as Akhil parents  gave nice performances. Ajay looks Perfect in his Antogonist role. 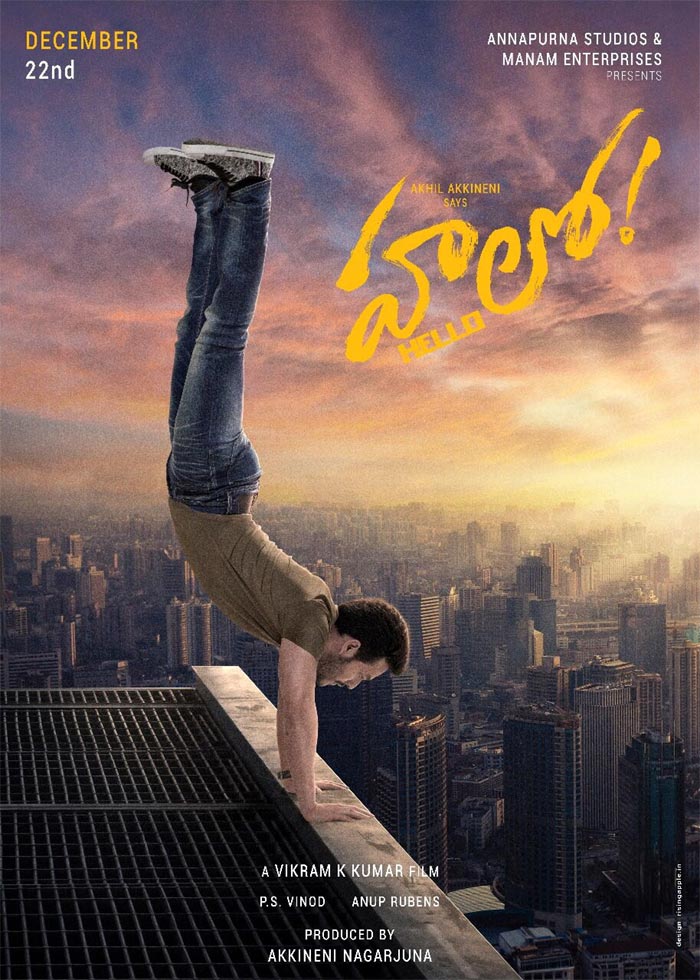 Hello Movie is directed by Vikram Kumar. Vikram Kumar’s Style of Narration, Story telling and Loveble screenplay  alreday we’ve seen in his previous movies. Nothing exceptional this Hello movie as well. His narrating style and Presenting Love Story to audience on Screen is mesmorizing. Once again he is proved as highly talented with his directorial Skills. Anup Reubens Composed music for the flick and the Songs and theme music resembles a bit Manam Movie. But all the songs are good. Especially the Title Song and Childhood backdrpo songs are Superb. Ps Vinod Cinematography, Prawin pudi Editing assets for the Hello Movie. The richness and High production values which sparks on the Screen and Visuals. It looks Nagarjuna as a producer for the Movie not even Compromised in Every Frame.

Back Ground Music and Songs We can’t find such a big negatives in Cool Breezing and well blended Love Story.

Akhlil Akkineni, Priya, Vikram Kumar and Anup Rubens Combo Love Epic Drama never and ever disappoint you…It’s my Gaurantee.. and Worth to Watch it as a feel good movie.