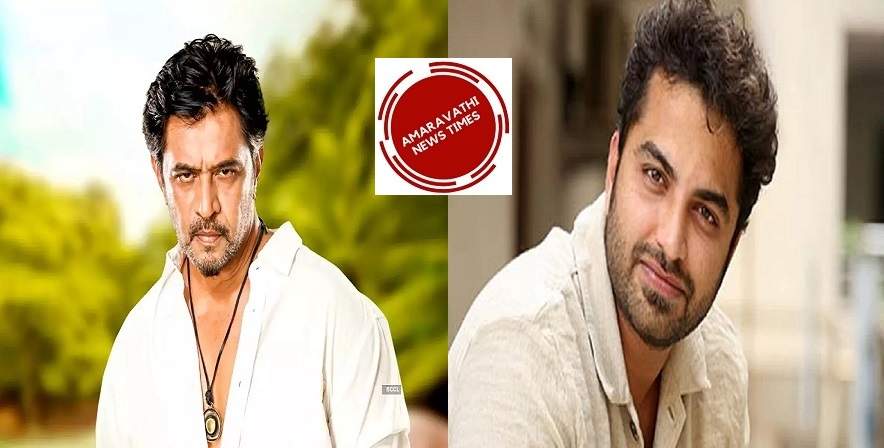 Arjun Impatient about Vishwaksen’s behaviour, The Movie which is Directing by Arjun, Where Vishwaksen & Aishwarya Sarja playing lead roles, Jagapathi Babu and Prakash Raj playing Major Roles in the movie. This is going to be the First Movie in Telugu for Arjun as a Director. Power Star Pawan Kalyan attended the movie launch and graced the Pooja ceremony and clapped the First shot of the Movie.

There is a news trolling about Vishwak that he asked little changes in the story, script, music and sets. Which is not considered by the production house. So, he is not happy with this. This issue is on the rage at this moment in Tollywood Industry and Film Nagar. Arjun is the Star Hero and Successful Director in South. Where Vishwaksen is an upcoming hero. SO, hope the issue will resolve soon…very smoothly and settle down, that both are eventually benefited.

Senior actor Arjun said that in his 42-year film career, he has never held a press meet about anyone, but he came here to share his views as he was saddened by Vishwaksen’s work. It is known that a film is being made under his direction with Vishwaksen and Aishwarya Sarja in key roles. However, in the last few days, differences of opinion started appearing between the film team and Vishvaksen.

We worked hard to design the set for the next schedule of my film. Tell everyone in advance to come to the shooting spot at six o’clock in the morning. But, that day at 5 o’clock in the morning I got a message from Vishwaksen. Sir I am sorry. When I saw Please Cancel Shoot, I didn’t understand what was going on. I didn’t even know what to say. There is no change in story, character and dialogue. Why are you doing this? I could not digest it.

So much unprofessionalism. Really this is an insult to the technicians. After that his manager sent a message saying he will talk to you later. A producer, a director does he have no manners? I did not think that we will make a big film with this hero and earn a lot of money. Want to make a good movie. No money was asked from any financier. The industry has seen many committed actors.

Jagapathi Babu is a very close friend of mine. I asked him for dates. He showed me the schedule. After it was completed, he said there were no films for two months. If you ask me to adjust for two days in between, it is not possible at all. He said that I have given them a commitment. That’s the kind of commitment an actor should have.

Balakrishna was called for the opening of this movie. He said that he will give the address on the same day. After saying that after ten days, Sari boss said that he will ask the director and producer of the film I am doing. That is commitment. Even on the day of the film pooja program, he said all the best and said sorry for not being able to come.

Venkatesh and Chiranjeevi said that they will come after asking their producers. That is commitment. I worked with Allu Arjun. Shooting means arriving on time. Even with so much money and leverage, they still struggle, but this actor (Vishwaksen) sends messages to cancel the shooting tomorrow.

Think of how many people a day’s shoot can be. At the time of shooting, they had to hold a press meet and talk. This is not to accuse him badly. Walking out of my project means a blow to my leverage. I thought no one should walk out of my film. I don’t want to do a film with him under such conditions.

Hence this pressmeet. After a few days I compromised with him and decided not to do this film. Manodi does not like Sai Madhav Burra’s dialogues and Chandra Bose’s songs. Anoop doesn’t like Rubens’ music. As a hero, he can make some suggestions. But, as a maker, I have to like it! I have tried to change it many times. He didn’t listen. Everyone should know this.

There are many producers who cannot speak out. I have courage and strength. That is why I am saying this. Directors and producers should be treated with respect. That’s basic. If you don’t like the story, no one is forcing you to do this movie. In the end, I can’t even bring the production boy. If you don’t know the techniques in the industry, don’t make films. Let them be in someone’s house.

The Producers Guild will talk to the members about this dispute. I can only say that this does not happen to anyone else. Also, I don’t want to make a big issue out of it. I came here only to make films. Not to create controversy. There are many people in the industry. Arjun said that he will start this film again with a different actor.

Article Name
Arjun Impatient about Vishvaksen..An actor without commitment..This is Unprofessionalism
Description
Arjun Impatient about Vishvaksen. Senior actor Arjun said that in his 42-year film career, he has never held a press meet about anyone, but he came here to share his views as he was saddened by Vishwaksen's work.
Author
Vani Prasanna
Publisher Name
Amaravathi News Times - ANT
Publisher Logo