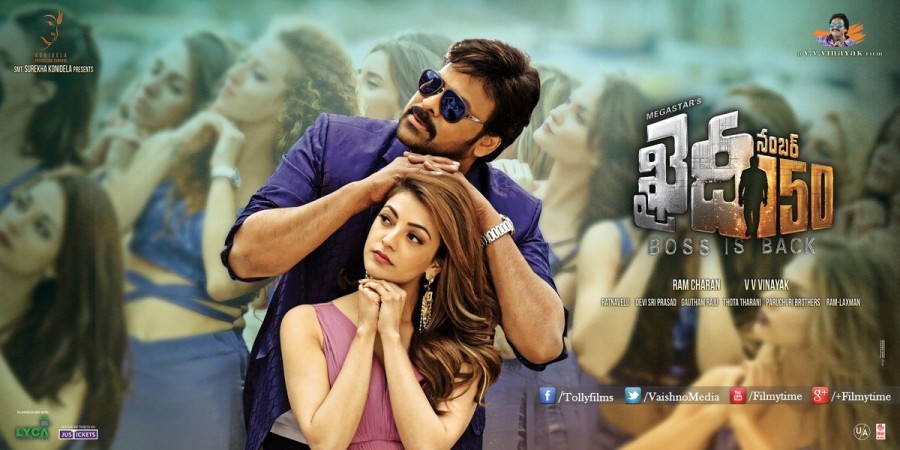 Mega Star Chiranjeevi is coming back into Tollywood after a long gap of 10 years with 150th Movie in his career. He is coming with a remake which is Kollywood blockbuster movie ‘Kaththi’ written and directed by AR Murugadoss and produced by Lyca Productions. Vijay and Samantha played in lead roles.

All the Mega Fans and Movie Lovers eagerly waiting for the Sankranthi Fest for the release of Khaidi No 150 Movie. Recently held the Pre Release function of the movie in Hailand is a Grand Success which notes a big success of the movie and for Meg Star with his come back movie. The movie trailers resembles that Tagore movie magic. Which looks like it’s gonna be a Tagore 2 Movie.

The Music and Back Ground Score is composed by Devi Sri Prasad. The Telugu version of the movie story Written by Paruchuri Brothers, Sai Madhav Burra and Dialogues by Vema Reddy. Cinematography by R. Rathnavelu, Editing by Gowtham Raju, Screenplay by Nithin Blaze, Choreography by Lawrence, Johnny and Sekhar.

Star Chiranjeevi Khaidi No 150 Movie is an action thriller drama and Chiranjeevi plays Dual roles in this movie. One Character resembles a petty thief Seenu(Khaidi No 150) who escapes from jail and comes to a village, while another one is a social activist Shankar. Accidentally Seenu (Chiru)meets Social Activist Shankar (Chiru) that he has to admit him in a hospital.

Another side a group of farmers’ fight against a corporate company for their village where the ground water has full of resources and the Company Director Tarun Arora wants to grab their lands by hook or crook. Shankar(Chiru) fight for the helpless farmers against the establishment led by the role played by Tarun Arora. In between Seenu (Chiru) comes in the place of Activist and behaves like him, he presents Social Activist as thief that Police might thought him as thief and arrest.

Now here real twist in the movie that Police arrest social activist assuming that he was a thief. Seenu (Chiru) enters into the Old age home and support the people who lives there. Another side Shankar (Chiru) imprisoned in Jail and submitted to court. In some manners he looks like innocent, but the police ignore this and presents him in court. how ever the Social Activist escapes from jail.

The thief Chiru comes to know all the issue happening in the village and supports the villagers by making plans against Tarun Arora. The issue comes to court and the court says if the Youngsters of the village positive about the Factory the case is in the favor of Tarun Arora other wise it’ll be in favor of Villagers. Chiru tries to get awareness about this in the villagers. but no media supports to this and ignores that it is useless.

Chiru tries to get media attention on the issue by focusing on the city and he plans to block water supply for the city. another side Tarun Arora blackmail’s thief Chiru by kidnapping Innocent Chiru to hand over the documents other wise he kill the Social Activist. How Chiru fights with Tarun Arora and save innocent Chiru. How he helped the villagers, how he faced the Villain, the case favors to Tarun Arora or Villagers, what is the relation between Kajal and Chiru are the rest of the story. Chiru Looks young and energetic in this Movie. Kajal Agarwal looks Gorgeous. There are awesome dialogues like “Samudram Venakki taggindi kada ani Odduna nilabadi navvakoodadu Tsunamila munduku vachchi munchestundi Jagraththa”.

Mega Star Perfect Come back movie Boss is Back and perfectly apt to compare as sequel of Tagore or called as Tagore 2.