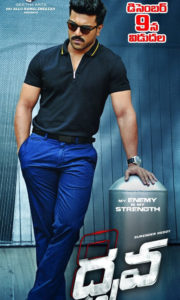 Dhruva(Ramcharan) is a hot headed cop who forms a gang of 4 members to destroy Criminals one by one off record. One day, When Rakul Preet(Ishika) knows about these activities, his trusted gang asks the reason for this criminal hunt. Dhruva then reveals about his mission to take down Siddharth Abhimanyu, a self made Millionaire who’s a criminal kingpin and taking him down will stop a big criminal chain. What follows is a brilliant move-counter move screenplay with a twisted satisfying ending.

‘Mohan Raja’ has written the story for Thani Oruvan, a story of good fighting over evil and winning shown as the conflict between a hot head cop and a Cool Entrepreneur villain. Thani Oruvan was praised for it’s screenplay and thriller elements and in the Telugu remake, Surender Reddy has added extra cool action to the film with slick cinematography. The movie’s set pieces were designed very well.

The reason why Thani Oruvan worked very well because the story though makes the villain a bad guy, you actually end up rooting for the villain to win and the climax was also done very well giving the Villain a special ending. In Dhurva, Siddharth Abhimanyu is the cool hero that plans more strategy and Dhruva is just a angry Cop hellbent on taking on the big guy. Later in the film, he gets into the game of strategies and the movie then turns much interesting. The story rolls in the same way for both Villain and hero until the end of the movie.

Surender Reddy, who infuses Comedy into the first half of his films usually, did not make that attempt and made it as a thriller from the beginning to end. Rakul Preet as Ishika is good as a forensic expert that helps with the missions Dhruva is planning against Siddharth Abhimanyu. The story has a lot of content that has to be pushed in into the 2 hours frame and the editing department did a good job. 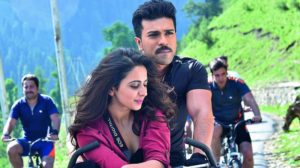 Cinematography
Story, BGM, Action
Good acting from all the characters.

Dhruva has many good elements that all make together a Entertaining weekend watch for both families and audience of all ages. No comedy elements may not appeal to some audience, but  after a very long time, When a refreshing movie with a big star comes on to screen, it can’t be missed.

Dhruva is sure shot hit suited for all ages. A very well made thriller by Surender Reddy. Action packed Performance by Ram Charan and Aravind Swamy as Stylish Villain Businessman.