Indian Sensational Director Ram Gopal Varma Once again targeted Power Star and Janasena Leader Pawan Kalyan on Twitter. As of now Pawan Kalyan is busy in Politics with formation of Janasena Party in Andhra Pradesh and Telangana. Pawan Kalyan running JFC (Joint Fact Finding Committee) and finding the facts about injustice to Andhra Pradesh State which done by Central Government. Pawan continuing discussions about this with Genius and intellectual People and Leaders of the Telugu States. RGV tweeed about this by tweeting satirical comments on Pawan Kalyan.

RGV tweeted that” The Way Pawan Kalyan Started Janasena Party in Hyderabad’s ‘Novotel Hotel’ like a Lion’s Uproar. But now in the name of pleasing various sections it looks like he is slowly becoming Chiranjeevi in Praja Rajyam Party. With the Tremendous upsurge of credibility to Pawan Kalyan got because that getting right and intellectual People like Jaya Prakash Narayana and Vundavalli Arun Kumar in to the same track with in his committee. 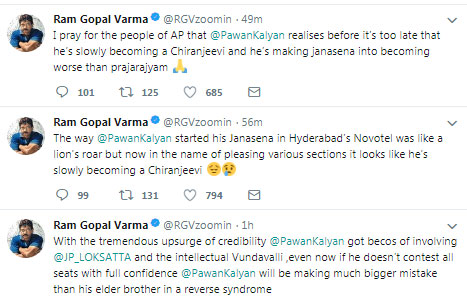 Ram Gopal Varma also tweeted that if Pawan does not contest Janasena all seats in the state with full confidence, Pawan will be making much bigger mistake than his elder brother Chiranjeevi in Praha Rajyam Party(who contested in all seats in AP and Telangana) is a reverse syndrome.  I pray for the Telugu people of AP that Pawan Kalyan realizes that it’s too late that he is slowly becoming a Chiranjeevi and he’s making Janasena into worse than Praja Rajyam in Telugu States.

RGV tweets are different that common public cannot understand his vision. RGV always cracks satirical punches which have different meaning Innerly. It’s very tough to understand his suggestions with hidden message that have steep logic. If we do steep analysis on that we can able to understand his words. Let’s wit and see whether the Statements of RGV about Pawan will again starts a huge war between Pawan Fans and RGV.