For the last few days all we are hearing news updates about a Cyclone that is formed in Indian Ocean near Andaman Nicobar Islands. The Amphan Cyclone creating a havoc in India that the storm is creating huge fears and threatening the coasatl states of India likely Tamilnadu, Andhra Pradesh, Odisha, West Bengal, Sikkim, Meghalaya and as well as the neighbour Country Bangladesh as well. The Reports confirmed that the Amphan Cyclone will hit the land of Coastal India and Bangladesh in between.

As per Reports The Amphan Cyclone is expected to make a landfall in between West Bengal’s Digha and Hatya Island in Bangladesh on Wednesday. Amphan Cycolne Amphan the most Big, Huge and Strongest Cyclone in the last 30 years that was hit in India. Amphan Cyclone is enraging in the Indian Ocean at Bay of Bengal with a High Speed. It said to fall on land with a speed around 260/270 Kilometre per hour.

When NASA’s Aqua satellite passed over the Eye of the Tropical Amphan Super Cyclone, that which is located at Bay of Bengal in the Northern Indian Ocean. Aqua found highest concentrations of water vapor which is clored Brown in the Tropical Cyclone Map and coldest cloud top temperatures were around the clear eye.

A Study has been done Every time on the Cyclones that the Water vapor Research and Analysis of tropical cyclones tells forecasters how much potential the storm has to be develope. Water vapor releases latent heat as it condenses into liquid. That liquid becomes clouds and thunderstorms that make up a tropical cyclone. It is important the Study of Temperature when you’re trying to understand how strong storms can be. The higher the cloud tops, the colder and the stronger the storms.

NASA-NOAA’s Suomi NPP satellite provided a visible image of the huge Tropical Cyclone Amphan on May 18, just off the eastern coast of India. The image showed the extent of the storm, which was over open ocean, stretching from just north of Sri Lanka, north, past the Indian states of Tamil Nadu to Andrha Pradesh.

At 5 a.m. on May 18, the Joint Typhoon Warning Center (JTWC) noted that Amphan’s eye was centered near latitude 13.6 degrees north and longitude 86.4 degrees east, about 301 nautical miles southeast of Visakhapatnam, India. Amphan was moving to the north and had maximum sustained winds 140 knots that speeds upto 161 Miles per hour or 259 Kilometres per hour.

The All State Governemnts of Bay of Bengal in India are alerted the Fishermen that not to go for Fishing for few days, due to Amphan Super Cyclone effect and issued Third Danger Alert at all Ports in thge Coastal Areas. The Indian Governmrnt took all necessary Action and precautions against Amphan Super Cyclone. Inidan Prime Mister Narendra Modi is monitoring the Cyclone updates closely. There are at least 12 National Disaster Response Force (NDRF) teams have been kept on stand-by in the High Alerted States like Tamilnadu, Andhra Pradesh, Odisha, West Bengal, Sikkim and Meghalaya . The Amphan Super Cyclone already shwoing it’s Impact on Coastal Sates in India, Bangladesh and Surrounded Neighbour Countries.

The States like Tamilnadu and Andhra Pradesh stated with a Heavy Rainfall with Strong winds and Thunder Storms, Which caused severe damage in many places. People are Evacuated from many coastal areas of the Bay of Bengal and More than 200,000 people were being evacuated from coastal districts and the Sundarbans of West Bengal. 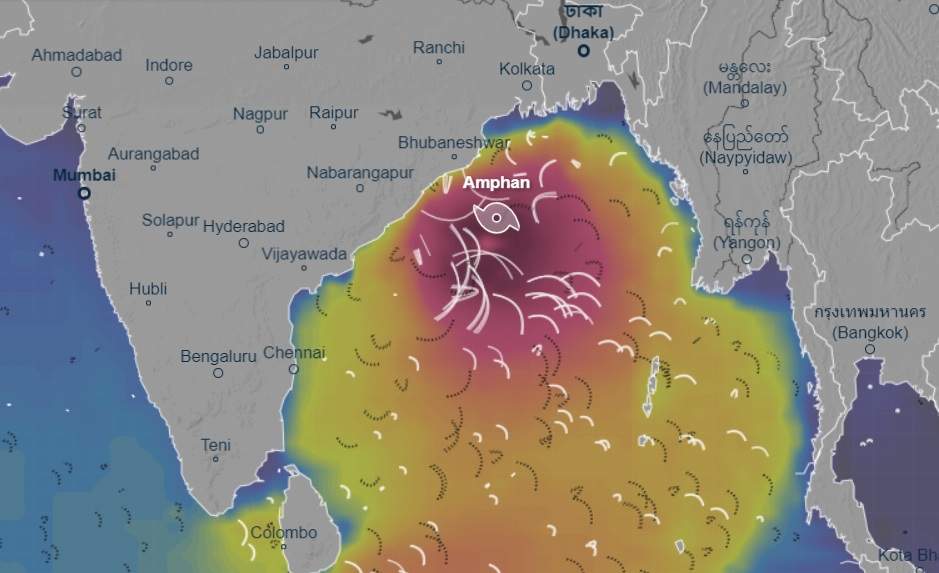