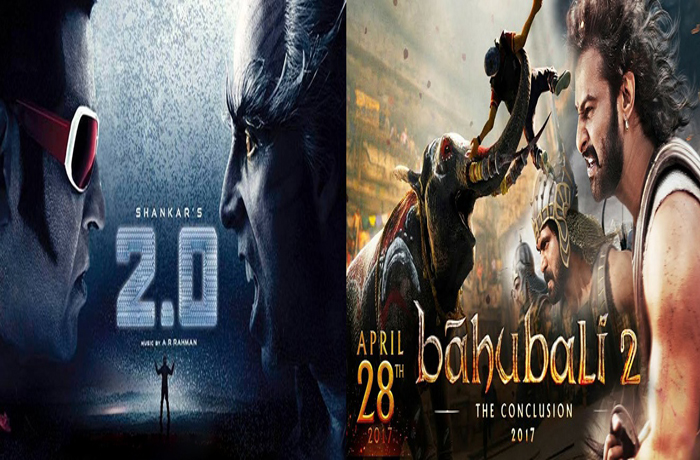 Robo and Bahubali movies are Sensation Blockbusters at Indian Box Office. We are all knew that how both Robo and Bahubali – The Beginning created wonders at Box Office. Both Movies are From South Film Industry and breaks the Barriers of Indian Cinema. South Super Star Rajinikanth, Aishwarya Rai Starrer Robo Movie in the Directorial of Star Director Shankar. The Robo movie released in 2010 and created waves at Indian Box Office.

Now this Year 2017 The Both Robo and Bahubali movies are coming with it’s Sequels. Robo Movie is coming as ‘ROBO 2.0’ in November this Year 2017 as Diwali Grand Release. While Bahubali – The Beginning Movie is Coming as ‘Bahubali – The Conclusion’ in this Summer and date confirmed as 28 April 2017. Both Movies are high budgeted with Grandeur Visual Effects, Huge Star Cast and highly Talented Technicians working for the Movies.

Now it’s time to discuss about how the ROBO 2.0 and Bahubali – The Conclusion will create wonders at Indian Box Office. The Both Movies are targeted on 1000 Crores. Which is dream for any Indian Movie never and ever touched this mark. The Bollywood movies up to now collected and crossed 500 Crores mark and PK movie Crossed 600 Crores in it’s life time Run.

Now these Regional movies eye on 1000 Crores mark which will set a Benchmark for Indian Cinema in Coming days. if these ROBO 2.0 and Bahubali – The Conclusion touches this mark. Both movies directors are highly professionals and highly talented. Who already proved with their talent with Regional movies at Indian Box Office with International Standards. The Star cast of these movies will only bring Audience to theaters, But the movie Run and Success is on the Shoulders of Captain of the Ship.

These Captains are Shankar Shanmugam and SS Rajamouli. Without their Creativity and Making Style of A movie there is no ROBO 2 Movie or Bahubali 2  Movie. Now All the movie lovers are eagerly waiting for these two movies.

Super Star Rajinikanth and Bollywood Super Star Akshay Kumar Starring ROBO 2.0 Movie going to finish shooting Part. This Science Fiction Movie has Some important Scenes which resembles Indian Ancient Mythology Ramayana Incidents.  There is a news trolling that based on Ramayana Story Imagination beyond Technical World Created in this Movie. If this is true it’s going to be huge fun and entertainment to Audience in Theatres. The Expectations are increasing on this Movie.

Another Talk is that Rajini is playing as Short Man in this Movie ROBO 2.0. Upto know the Short man role played by Kamal Haasan only. Now Rajini is doing this means Fans are So Happy about this. The ROBO 2.0 is Producing under Lyca Productions Banner which is India’s Highest Budget Movie. The Movie ROBO 2.0 has many surprises more than this news is trolling.

Rajini playing not only as Scientist Vaseegaran and Robot Chitti Roles, But also playing another 3 roles in this Movie. While Akshay Kumar in 10 roles  like Raavan(RAMAYANA) in this Movie.   In terms of Technology the movie is picturizing in 2D, 3D, IMAX 3D, IMAX Real 3D with the Standards more effective than Dolby Atmos Sound System Technology. The  Movie is going to be much bigger and larger than Robo Part 1. Shankar is not officially announced anything about the movie yet. But if the above information is true the ROBO 2.0 Movie is a Wonder visual feast for eyes and will create wonders at Indian Box Office it’s damn sure.

SS Rajamouli Directing Prabhas, Rana Daggubati, Anushka and Tamannah Starrer ‘Bahubali – The Conclusion’ which is going to be a Grand visuals movie. The Movie Trailer and Pre Release function already created much hype on this Movie. The Whole Movie Lovers are waiting for the Question raises in the Part 1 that Why Kattappa Kills Bahubali will get Sure answer in this Movie.

According to Director version the Bahubali – The Conclusion is much bigger and larger than in terms of Visual Effects and Story where ‘Bahubali – The Beginning’ is Breakfast and Bahubali – ‘The Conclusion’ is Full Meals. Let’s Hunch these Two movies are going to create wonders at Indian Box Office and Cross the 1000 Crores Feat.

Say loudly All The Best for ROBO 2.0 and Bahubali – The Conclusion Movies which are The Pride of Indian Cinema.