Sree Mukhi got a chance to act in Allu Arjun movie and missed unluckily. Sree Mukhi want to shape up her career while she is in good swing on Small Screen. She follows the Theory and applying it  in her Professional life to set Red Carpet.  She is sincerely trying to act on Silver Screen to make her presence. Apart of this she expressed her will towards silver screen and announced that she is ready to do any kind of role in Movies.  For this Instance she made some Hot, Romantic and Sizzling Photo Shoots and circulated. She got a few offers with these photo Shoots and played a few roles in movies. 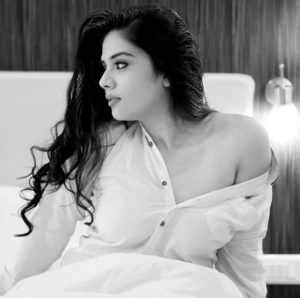 Finally Sree Mukhi got reply for her waiting and got big offer into her hands and she missed it. Stylish Star Allu Arjun’s next movie she offered with a Heroine Role beside him. The Team decided to take her in to the Movie and discussed with Allu Arjun. Bunny also expressed his interest towards to her and gave green signal.

The Movie team also made a Auditions with her. But later don’t know what happened the offer has slipped form her hands. Sree Mukhi was totally disappointed with this incident. The Hot Beauty has two movies in her hands and she want to work in famous and big star movies only. So let’s wait and see that the Hot and Sizzling Actress dream would comes true or not. Le Wish her for Success and Big Break in her Career.