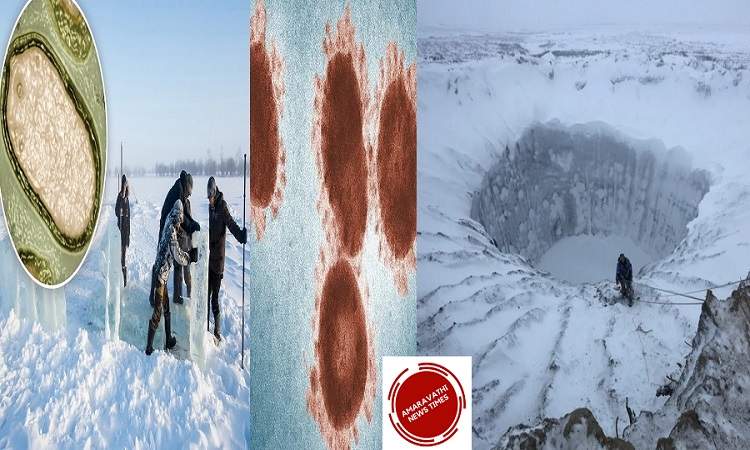 Another thunderbolt on the world that is just recovering from Corona! Scientists have identified a 48,500-year-old virus in Russia. Along with this, more deadly bacteria were discovered. Researchers warn that these may turn into infections and become fatal.

There are fears that another virus will attack the world in the form of a pandemic. These concerns are caused by French scientists’ discovery of a 48,500-year-old zombie virus in Russia. A New York Post article revealed that scientists pulled out the virus from the bottom of a frozen lake in Russia.

The article states that any diseases can be transmitted by this unknown virus and that extracting the virus will be dangerous. Global warming is melting the frozen ice in the Northern Hemisphere. There is a danger that organic matter trapped in the ice that died out millions of years ago will come out. It can also contain deadly bacteria.

Revived microbes and viruses that have been dormant since prehistoric times are also present in organic matter. Scientists have conducted research on some of these, which scientists consider as zombie viruses. Among them, the oldest virus was identified as Pandoravirus Yedoma. It is found to be 48,500 years old.

It is believed to be the oldest of the viruses that froze in ice and returned to normal. It is estimated that there is a possibility of infecting other organisms. In 2013, the same scientists identified a 30,000-year-old virus. It is noteworthy that this also emerged in Siberia. In the latest research, scientists have described 13 viruses.

They said that each virus has a different genome. Pandoravirus was discovered at the bottom of Lake Ukechi Alas in Yakutia, Russia. Some of the remaining viruses have been found in the fur of mammoths and the intestines of Siberian wolves. The researchers warned that these zombie viruses have the potential to become infectious, so this could be a sign of medical danger.

He expressed concern that gases like carbon dioxide and methane will come out due to the release of organic materials frozen in the snow, which will further increase the greenhouse effect. As a result, the ice will melt faster in the polar regions and there is a risk of more viruses coming out. He warned that it could turn into a vicious circle.